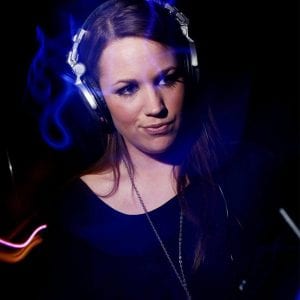 Raw crunchy 909 beats, grooved-out 70s funk hits and attention grabbing Acid lines are just a few of the trademark musical ingredients Jade Cox has come to be known for. Though, while Jade’s sound isn’t unlike one you’d have become accustomed to hearing in a warehouse of late ’80s Chicago, this hasn’t stopped the young talented London DJ from representing her unique spin on that style.

With her skills turning heads wherever she plays and an ever uncompromising realness to the music, she progressively built a following on London’s pirate radio airwaves, before settling into her current weekly show ‘London Underground’ on global radio platform Club FM Mallorca. This in addition to regularly providing guest mixes for established podcasts including DJ Sneak’s ‘Gangstercast’ series (being an honour in itself to be chosen amongst some of House music greatest names), has really enabled her to push a style she truly loves and believes in.

When the time came to get her producing game on, the previous years spent focused on playing and pushing her own unique sound, had instantly enabled her to identify with a production style of her own. So, it was no surprise that when inside her first year of getting to grips with making beats, Robsoul Recordings boss Phil Weeks picked up 5 of Jade’s earliest works to release her debut EP “Sketch The Way” on his imprint.

With the EP receiving strong love with key names supporting her release in their charts and mixes, this further cemented her mind to persevere and push what’s real to her.

Having played all the key spots in her home city, Jade has swiftly progressed to playing headline gigs in all corners of the UK, and with new tracks currently in the works, look out for her forthcoming material.